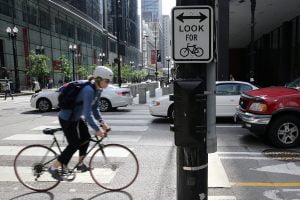 A cycle lane was simulated to measure cyclist behavior
A mix of technologies has been added to New Jersey’s bike lanes
Researchers used a combination of high- and low-tech strategies to monitor and evaluate the success of pop-up bike lanes installed around Asbury Park, New Jersey.

Technologies deployed include virtual reality (VR), lidar sensors, and traffic cameras, as well as wearable sensors on the riders themselves to record stress levels.

The research team sought to better understand the behavior of cyclists before and after the construction of cycle lanes and to determine the best location and method of installing cycle lanes.

Using images captured by lidar sensors, a Rutgers University team created an e-scooter simulation for users that offers an additional assessment of the rider’s response in certain traffic situations.

The project is intended to improve the safety of the bicycle network and comes as part of a project between Rutgers University and the city council to build a bicycle network throughout the city. By building temporary bike lanes and evaluating their responses, the researchers hope to reduce the costs associated with establishing more permanent bike routes.

The results of a post-study survey showed users gave the car an average safety rating of eight out of 10, with 90% of respondents saying they would do the job permanently, although most also said they felt threatened by cars in the other lane.

The researchers concluded that virtual simulation as a user assessment method is flawed.

“Riding a scooter is difficult to simulate,” the report said. “Some users experience motion sickness when using VR headsets. However, the 3D digital environment is very useful for modeling potential changes in the built environment.

The team also said that VR technology has great potential as a tool to help with urban planning in the future, although more work is needed to perfect the method.