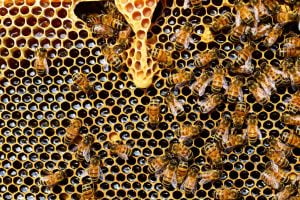 The goal is to manage bee pollinators and combat colony collapse disorder, which destroys honey bee colonies every year, according to the USDA.

Bee pollination improves the world’s food chain. Pesticides, drought, parasites, mites, and deformed wing viruses are some of the threats to bee colony health. The Beewise Insect Solar Habitat can accommodate up to 24 colonies. The bees are powered and fed autonomously.

If there is a problem in the robotic hive that cannot be repaired autonomously, beekeepers receive a real-time warning that the bees need human intervention. Beekeepers usually check colonies every three to four weeks, which may be too late if colonies have collapsed.

The robot installed in the BeeHome monitors the bees in all weather conditions. The house itself is equipped with humidity and climate control, which strengthens the bee population against the elements.

Pests such as the harmful Varroa mite are automatically detected in the colony and sprayed with chemical-free drugs to prevent infections and infections that can cause the death of the bee.

AI tools can analyze when a colony is ready to swarm and can autonomously change conditions to prevent swarming. When swarming, the colony can be divided into two parts to reduce congestion or the bees flee due to lack of food and water or there are parasites, external disturbances, bad weather conditions, and other problems.

When the honey pot reaches 100 gallons and is ripe for harvest, an automatic signal alerts the beekeeper that it is the right time to empty the hive frames. The AI ​​system also controls frame manipulation, such as merging and splitting hives.

AI and advanced robotics enable beekeepers to optimize their colonies. The autonomous hive monitors the health status of bee colonies. Each bee in the robotic hive is monitored and the beekeepers track the data.